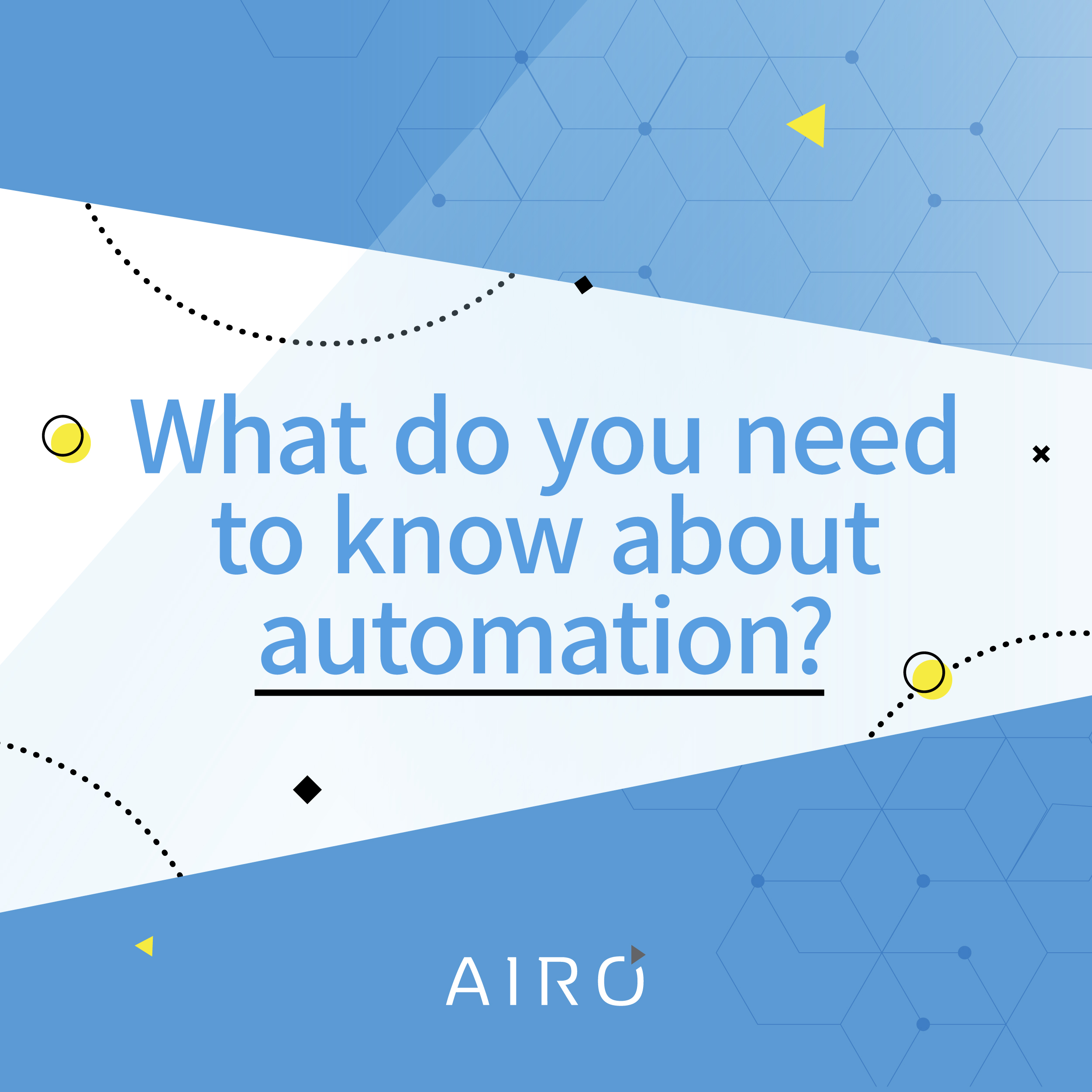 With the IT industry growing quickly, it’s only a matter of time until it becomes too big to manage, whether for a smaller scale industry or a larger corporation. Fortunately, there’s always IT automation to fall back on when the time comes to scale up your business to the next level.

What is IT automation?

Automation, and specifically IT automation, uses software to take over the repetitive aspects of running a business, from answering client queries to assigning workloads to your staff.

Automation can help ease pain points in business operations by freeing up your team to address other concerns instead of spending their time working on administrative tasks. This lets you save time and money, as well as allow you to deploy the employees in charge of the system elsewhere. IT automation is a growing industry, and set to grow even larger as more and more hybrid technologies and cloud services take over the traditional computer-based working environment. 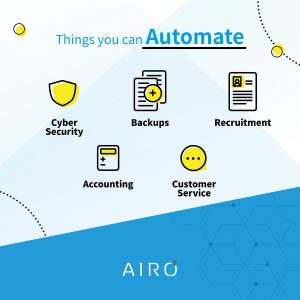 Why is automation important?

Humans are finite in their ability to manage; while they can definitely try and be everywhere at once, things can often escape them. This isn’t a problem with your management team: it’s a problem that can be solved by automating the most repetitive processes to make the best use of your team without leaving them to work on things that can be handled by a computer.

Allowing a computer to handle repetitive tasks reduces the risk of errors as well as increasing the speed at which you or your business can respond to and resolve problems, and allows you to turn a higher profit.

However, it isn’t just about reducing errors; it’s also about freeing up your team to allow them to pursue more salient tasks, such as reaching out to new consumers.

Automation is not a new industry. 68% of marketing businesses already use automation, and as the pandemic highlights newer ways for businesses to run, this is only set to increase. 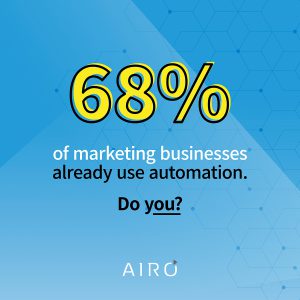 How do you start using automation?

First things first: if you don’t have an IT department on hand, outsourcing your automation needs is always a better solution than trying to DIY it. This is because while the process to automate is relatively simple, it’s hard to do if you’re not familiar with the processes that underpin automation, and so it’s easier to outsource that task to someone who can make sure that you’re on the right track.

The easiest tasks to automate flawlessly are the ones that have a definitive start and end. Tasks like addressing software flaws, responding to cold emails, and assigning or updating calendars with workload are tasks that can be automated with very few flaws; the system involved can easily identify and solve any problems on its own! However, more complicated tasks might be better kept in the hands of the team.

There are certain automation features offered free to businesses with business accounts, however it’s normally not for internal business processes, but for the external efforts, such as social media and newsletters. It’s worth trying those processes out first before you take the plunge and automate your internal business as well, but don’t be too put off if there isn’t a big change in your day to day – it could be that the process you’ve just automated doesn’t take up a lot of time in your organisation! 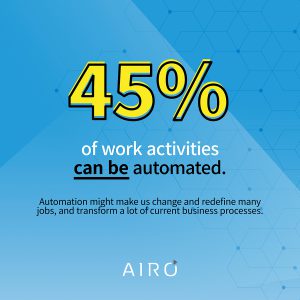 What should you keep in mind for automation?

Before you go and call in quotes for automation, you need to know what tasks you’re going to automate.

The idea behind automating tasks or aspects of the business is that you’re freeing up time and team members to address different problems to what they normally were. If a sizeable chunk of your business is involved in handling your customer chats, for example, and could be better used elsewhere, figuring out how to automate the frequently asked questions would free up your team-members to address more important client concerns.

However, it isn’t just a case of automating everything just because you can. While most repetitive tasks can be safely automated without a hitch, consider taking a good, hard look at your business before you go ahead and set everything to run as a process. Automation on its own is just a series of codes, and if you’re automating aspects of your business that no longer make sense, you’re not going to save much time or effort in setting them to run automatically.

Before getting in any IT expert to help you automate, you need to have an understanding of:

Automating the wrong processes will usually just lead you back to the start of the problem, so it’s key to understand where your business needs stand at the moment! For example, if you’re automating your chat and customer care service, but you offer multiple complicated options, automation isn’t necessarily a better replacement for human interaction. Similarly, if you’re automating a process that is no longer in use – such as customer service – then the time and money spent automating that process could be better spent elsewhere.

Every process you automate should still be relevant and interesting to the business you’re running today, and if you’re having trouble determining if that’s true, it’s time to step back and take a look at what your current business goals are.

Similarly, automating all your processes at the same time is a risk. You’ll need time to learn what works for your business and what doesn’t, and to be able to go back if something you’ve automated doesn’t work as an automated process, or causes more problems in the long-run.

However, just because your administrative tasks automate easily doesn’t mean that other tasks will automate the same way — so always keep an eye on your progress and what you’re doing. For automation, slower and steadier is definitely the way to go.

Furthermore, don’t confuse automation for increased profit. Although you might be working faster now, automation doesn’t promise miracle results: it’s simply a way of freeing yourself to do different things. Automation can help a lot, but overestimating what it can bring you is a surefire way to create an automation programme you’re unhappy with.

Should I be worried about security?

Not necessarily! Automation can actually help improve your security by outsourcing the most time-consuming security tasks – such as keeping your security systems up to date, monitoring your hosts, managing shared resources – to a process that isn’t beholden to human error, meaning that it’s less likely to fail or cause a breach.

How do you implement automation into your business?

Although automation is heavily technological, it depends a lot on your organisation, and especially on the people that work with you! Before going off and automating everything, you’ll need to get your team on board. Here are five fail-safe tips to make sure that your automation escalation goes just the way you want it to: 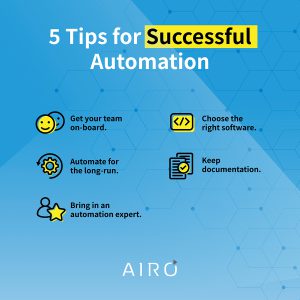 If you want to know how automation can benefit your business, drop us a message and we’ll be happy to help point you in the right direction!

This website uses cookies to improve your experience while you navigate through the website. Out of these cookies, the cookies that are categorized as necessary are stored on your browser as they are essential for the working of basic functionalities of the website. We also use third-party cookies that help us analyze and understand how you use this website. These cookies will be stored in your browser only with your consent. You also have the option to opt-out of these cookies. But opting out of some of these cookies may have an effect on your browsing experience.
Necessary Always Enabled
Necessary cookies are absolutely essential for the website to function properly. This category only includes cookies that ensures basic functionalities and security features of the website. These cookies do not store any personal information.
Non-necessary
Any cookies that may not be particularly necessary for the website to function and is used specifically to collect user personal data via analytics, ads, other embedded contents are termed as non-necessary cookies. It is mandatory to procure user consent prior to running these cookies on your website.
SAVE & ACCEPT

Join our mailing list and receive a FREE tip sheet to help protect your company from cyber threats.

Your exclusive tip sheet is on its way to your inbox!